The cast of our recent production of TROY.

​TEA
by Velina Hasu Houston
A powerful tale of women, immigration and survival.

Presented as part of Hero Theatre's ongoing commitment of bringing more
​women of color to the classic American cannon. 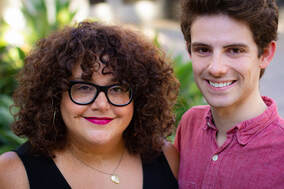 HERO THEATRE ANNOUNCES IMMERSIVE PROJECT
ADDRESSING SCHOOL SHOOTINGS
Hero Theatre announced a special collaboration with immersive theatre artist Jack McCarthy as part of their 2020/2021 season. McCarthy has been commissioned to create two world-premiere immersive plays. The productions are part of Hero Ignite, a new division of the company that serves as an incubator for new works created and inspired by the experiences of youth in America today.

The first commission will be an immersive experience that will center around the themes of anti-violence, anti-suicide and gun control for high school youth. The production will be sponsored in part by Melanie Neumann of Present Now and is planned to open in the Fall of 2020.

In a statement, Producing Artistic Director Elisa Bocanegra said "After seeing Jack's immersive play at the Hollywood Fringe and knowing that he is a recent graduate of USC where I mentor students, I felt it would be great to marry Hero Theatre's mission for social progress with Jack's artistic strengths. The first of the two projects will address the emotional and mental health of students and families affected by school violence, including shootings."


The second commission will be Hero Theatre's first holiday production, a bilingual immersive experience, premiering in the Winter of 2020.

For additional information about Hero Theatre and their current season, visit herotheatre.org.