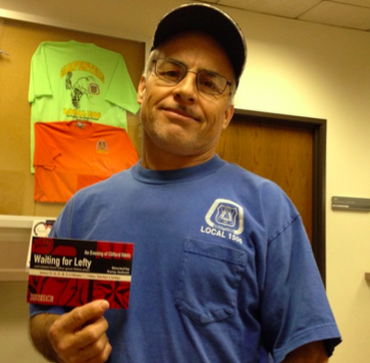 Alfred Loera of Carpenters Union Local 1506 at our production of "Waiting for Lefty." Presented free-of-charge to labor union members throughout Southern California.
​HERO Theatre invites audiences to envision and experience America as we do.

We seek to use art to model and bring about social progress. Stories on our stage mirror America today.  We examine classical and contemporary works, ensuring that equity, diversity and inclusion remain in the forefront.

We challenge the traditional definition of classics. What will future generations call a classic? We define future classics as those that have a lasting impact on audiences, help shape a better society and reflect our nation today.

We produce work that reflects and uplifts marginalized voices.

Hero Theatre welcomes many first-time theatregoers to our plays by providing free to low cost admission. Granting access to all.

We champion work that we feel is relevant. With our upcoming production of Tea, audiences hear the experiences of Japanese war brides living in the United States after WWII. Tea is a story of immigration and an inspiring tale of overcoming prejudice and hardship. Written 30 years ago by Los Angeles playwright Velina Hasu Houston, Tea stands as a vital addition to the American canon.

Our new environmental justice multimedia project, Nuestro Planeta, is a 10-year long, large scale, commissioning and development initiative. Our goal is to bring environmental awareness to vulnerable communities who now find themselves at the epicenter of the climate crisis.

Hero Theatre invests and believes in the next generation of audiences and theatremakers.

HERO Ignite, a new division at HERO Theatre, serves as an incubator for new works created, and inspired by the millennial generation. Our distinctive Mentorship Program provides students from local universities and historical black colleges an opportunity to learn from theatre practitioners in the field. Many of our mentorship program alumni have secured leadership and acting positions at HERO Theatre and beyond.

With projects such as The Super Sabado Show, we were able to raise money to help families in Aguadilla, Puerto Rico who were affected by Hurricane Maria. With Festival Irene, we launched a movement to claim playwright María Irene Fornés' rightful place in the classic American canon. Proceeds from the festival aided Fornés who was suffering from Alzheimer's at the time. With our production of Troy​, we donated a portion of the proceeds to women living in domestic violence and homeless shelters.

Hero Theatre. Building a better society by championing voices that need to be heard. Now.
"Hero Theatre is everything a theatre should be. Inclusive to everyone dedicated to world class work.
A place where a young talented artist can learn and work with seasoned professionals.
​It should be supported by everyone who believes in the future of the American theatre." - Eduardo Machado, Playwright
​ 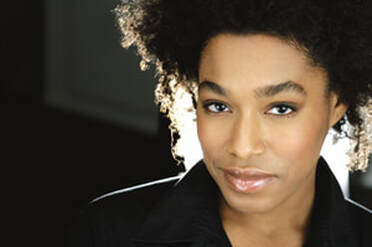 Playwright Amina Henry was commissioned through our program Our America to write Troy. Last season, we presented the world-premiere.

Residents of The Downtown Women's Center attend our production of Troy.
​Through grassroots fundraising efforts, HERO was able to provide free admission tickets and private roundtrip transportation to DWC residents . ​ 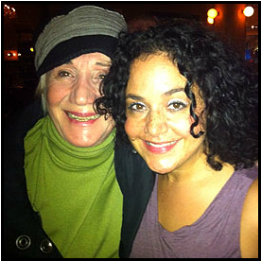 Olympia Dukakis & Elisa Bocanegra
The inspiration for HERO Theatre came about backstage in the wings of the Laura Pels Theatre, during the Roundabout Theatre Company's production of "The Milk Train Doesn't Stop Here Anymore." The show's star Olympia Dukakis turned to cast-mate Elisa Bocanegra and asked, "Why do you look so sad all the time?"

​Bocanegra confided in Dukakis that she was saddened by the lack of equity and inclusion in theater. "There are so many actors of color in need of opportunity," responded Bocanegra.  She was also disappointed that many of her friends who wanted to do more classics were up against a wall because they didn't have the resources to go to graduate school.

Bocanegra continued, "I just wish we had a place where we can all work together. Actors who are well trained can learn from actors who came up in the day where you just struggled. When life experience and hitting the pavement equaled an MFA. A place where my white friends can work alongside the Puerto Rican and Black actors that I grew up doing community theatre with in the Bronx. There is so much to learn from one another."  Dukakis replied, "Elisa it's time for you to hustle and start your own company. A place where you can grow and help others like you."  Shortly after, HERO Theatre was born. The company started with a benefit reading of Chekhov's "Three Sisters" directed by Obie-award winner Lisa Peterson. Olympia Dukakis hosted the event and still leads the company's Advisory Board.

Elisa Bocanegra
Elisa Bocanegra is a Puerto Rican artist and the founder of HERO Theatre. Her work with HERO Theatre has been featured in The Los Angeles Times and American Theatre Magazine and is a favorite amongst local theatre critics. Elisa won the prestigious TCG Leadership U Grant, the nation's largest grant of its kind, for her work with HERO Theatre. This provided her the opportunity to be part of the Leadership Team at the Oregon Shakespeare Festival for two seasons. Her stage directing credits include TROY, a modern retelling of THE TROJAN WOMEN about women and homelessness in Los Angeles. She directed TROY and worked alongside Kilroy List playwright Amina Henry in the development. Other directing credits include Festival Irene: A Tribute to Playwright Maria Irene Fornés, The Floating Island Plays by Eduardo Machado, and a new screen and stage project called Nuestro Planeta, which focuses on educating Latinx audiences about environmental justice within the Americas. Nuestro Planeta is a ten-year-long new work commissioning initiative. Elisa is mentored by Patrisse Cullors, co-founder of Black Lives Matter. She is part of Cullors' new Environmental and Social Justice Arts program for activists at Prescott College. In January 2021, it was officially announced that Elisa is part of the inaugural NEXUS Cohort at New York Stage and Film. This highly selective program asked the industry's top professionals to nominate artists who they believe are the next generation of influencers in film and theatre. A committee of Pulitzer-winning individuals selected Elisa for her work as a director, producer and performer. As an actor, her first film, GIRLFIGHT, won the Grand Jury Prize for Best Film at The Sundance Film Festival. Elisa has extensive experience performing at major theaters around the country and has also worked at The Roundabout Theatre Company in New York. She is managed by Artists First Entertainment's Brian Dobbins, the Executive Producer of ABC's groundbreaking comedy Black-Ish, and manager Ashley Acevedo.